Tom Holland on his darkest role yet, and why No Way Home could be his last Spider-Man film 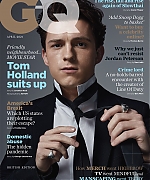 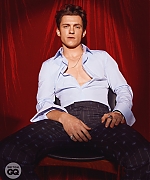 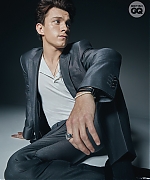 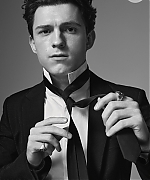 BRITISH GQ – Whether as Marvel’s Spider-Man or heroin addict Cherry in his game-changing new role with the Russo brothers, Tom Holland has been on one high or another since the age of 19. Now, as the business of moviemaking rewrites the rules of topline renown, we ask the face of a ten-figure franchise how he learned to swing with the big dogs and where he plans to land when (and if…) his feet finally hit the ground

Another indication is the emotional and physical pulp Holland found himself in 14 months ago: clucking, sweat-drenched and wide-eyed, with a pair of off-colour Y-fronts around his thighs, on the set of Cherry, an independent film shot in Cleveland, Ohio, and directed by the Russo brothers Anthony and Joe (Captain America: The Winter Soldier and Civil War; Avengers: Infinity War and Endgame), with a screenplay by their sister, Angela Russo-Otstot, and Jessica Goldberg.

Cherry is Holland’s moment to try on his big-boy movie star pants. The ride is wild, traumatic and fist-bitingly raw. The subject matter is distinctly adult: it is a toxic junkie love story, set before and after the Iraq War of 2003.

“Have you ever taken heroin before?” Holland asks me, I assume rhetorically. “Because I have not. I couldn’t sit there on set and inject heroin into my chest – that’s not how it is done. I had to get it right. This role took me to some of the darkest places I have ever been, emotionally, physically, anythingly… I would never go back there again, not for anyone. I am pleased I did it, but that door is now closed and locked.”

For myriad reasons, Holland’s performance in Cherry is astonishing. For almost the entirety of the film you can see – almost feel – the chemicals rattling around in his pale, gasping veins. Yet it’s more Ewan McGregor in Trainspotting, however, than Timothée Chalamet in Beautiful Boy; there’s horror, sure, but there’s also a distinct sense the directors want empathy for their character’s story.

The dude’s skin gets pallid, with all the colourless putridity of raw chicken that’s three days turned. It’s a film in which the demons (and America’s contemporary problems) are stuffed down your throat, via your eyeballs, while Spider-Man’s cherry-red and royal-blue Marvel Cinematic Universe-issued spandex morph suit is entirely absent. Spidey fans will be shocked out of their Butterkist sugar comas.

“I think there might have been some people at Disney confused as to why their Spider-Man had become a heroin addict.” Holland says, chuckling, clearly enjoying the idea that a few of the Disney execs – who bought Marvel in 2009 for a cool $4 billion (£2.4bn) – might be sweating under the lights here a little. Holland, after all, is one of the world’s most valuable stars, if not the most valuable star in the MCU.

The actor is currently talking to me from a rental house in Atlanta, Georgia, where he is shooting Spider-Man: No Way Home. He’s been here since September and “We’re close to finishing, actually”. Today (a Monday) is a good day because it’s Holland’s one day off a week. After talking to me he’ll go to a local golf club with one of his younger brothers – Harry, who has been doubling as his assistant; Holland has two other siblings – and thwack a few irons into the clipped turf in a bid to just forget. To forget who he is and to forget, just for a fleeting moment, the insurmountable pressure that comes with being who he is.

Cherry is an adaptation of author Nico Walker’s literary debut, a (mostly) factual autobiography that tells the story of a smart yet vulnerable man, “Cherry” (Holland), who flees stale suburbia’s all-day bongs, unpaid bills and unemployment boredom by signing up for the US Army and heading promptly into the oil-soaked stench of Iraq. Clue: this turns out to be a massive fucking mistake.

He trains to kill the “Haji” (a derogatory term for an Iraqi, used by US military throughout the 2003 conflict), learns to stuff his comrades’ hot guts back inside their blackened, hollowed chests as an army medic, hauls out to Iraq’s “Triangle Of Death”, waits, masturbates in a Portakabin in the middle of the desert thinking about his beautiful, doe-eyed wife back home in Cleveland (played superbly by Ciara Bravo) and then waits a bit more.

Just as things are getting boring he watches as his marine buddies suffer a direct hit and burn alive in their dust-coloured Humvee, his bunk buddy’s wedding ring shining out from the blackened mass of charred bodies and twisted metal like a crescent moon in a midwinter sky. Experiences like this affect a man.

Returning home, our antihero finds his post-war life utterly shaken by severe PTSD, which, in turn – thanks to US doctors handing out opiates prescriptions like parking tickets at the time – leads to Oxycontin abuse. Cherry’s wife also becomes a slave to the dope. Then they start to inject heroin intravenously and our character makes a decision to fund their spiralling habits with a spree of amateurish, pistol-wielding bank robberies.

Read the rest of the interview at the source 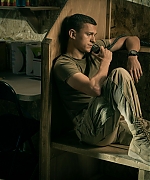 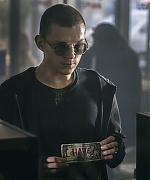 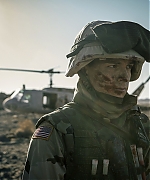 They felt a strong connection, even if the story doesn’t necessarily mirror their own. It’s close enough: “We’re from Cleveland and Nico’s from Cleveland. Interestingly enough, we know a lot of people that are implied in the book,” Joe added. “I think he’s fictionalized names and personalities. But I worked at the same restaurant that Nico worked at, 10 years apart. So he had a very similar upbringing to us. He just had a very different journey than we did.”
END_OF_DOCUMENT_TOKEN_TO_BE_REPLACED