Tom Holland Is In the Center of the Web 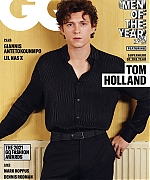 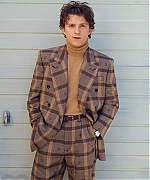 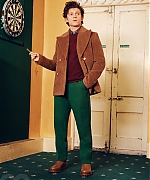 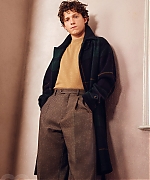 GQ MAGAZINE – “This is going to sound like complete bullshit, but I swear to you that this is true,” Tom Holland says. “Have you ever heard of cognitive dreaming?”

We’ve been talking for a couple of hours at this point, and conversation—as it tends to, after long enough—has drifted onto the subject of dreams. I’ve been having nightmares lately, I tell him. Anxiety. This is something Tom Holland knows all about. He is a terrible sleeper; a sleepwalker; a sleep undresser, even. (“Four out of 10 sleeps I wake up completely naked.”) As it happens, he has a trick for dealing with nightmares, and because Tom Holland is Tom Holland—the actor who put the friendly back into your friendly neighborhood Spider-Man and is just famously, energetically, irresistibly nice—of course he’s happy to help.

“Okay, so I’ll tell you how you do it. Essentially, when you’re asleep, your brain is working way faster than it is when it’s awake. Jon Watts [Holland’s director on three Spider-Man movies] told me this, and it has worked. If you’re in a dream and you read something, say, a stop sign, and you turn around, when you look back at the stop sign it will have changed. So what you do is—and this is where it sounds stupid—you set an alarm for every hour of the day when you’re awake. When the alarm goes off, you read something. So I’m reading—”

At this point Holland looks around his bedroom, which is sparse, an unmade bed and a half-open wardrobe behind him, low fall sun streaming in the window, and alights upon a packet of pistachios. “—Roasted and salted. You turn away, you look back at it: Roasted and salted. Okay, I’m not dreaming. What happens is when you do it for a long time, you start to do that in your sleep. Sometimes, if I’m having a really bad dream, I’ll look at a sign and go, ‘Oh, I’m dreaming.’ And then you have free rein to do whatever you want.”

“Yeah. The last time it happened to me, I was flying around the Golden Gate Bridge. It was awesome.”

Holland is at home in London, waiting out a government-mandated travel quarantine, so for now we’re talking over Zoom. It’s an unusual time for the actor, a rare pause. Since he landed the part six years ago, Holland has played Spider-Man in five movies, of which four have made more than a billion dollars each. In the past year or so he has starred in three films, taking on the offbeat dramatic roles of a priest-murdering orphan in The Devil All the Time and a heroin-addicted bank robber in Cherry, and finished shooting two more. Still somehow only 25, Holland has ascended to a tier of stardom few actors ever reach, and rarely so young. “There are very few actors working now who are versatile in the way that he is,” says Spider-Man producer and former Sony chairperson Amy Pascal. “And he’s the hardest-working person that I know.”

“Since I got cast as Spider-Man, I haven’t really taken a break,” Holland says. So he’s enjoying some state-enforced time to himself. “I find myself ringing my dad [Dominic, a comedian and author] for stuff that I should definitely know how to do,” he says. “ ‘Dad, how do I put the washing machine on?’ ” Last night a skylight broke in bad weather, flooding his kitchen. The outside world has a way of forcing itself back in.

The next few months promise to be hectic even by Holland’s standards. In December he’ll star in Spider-Man: No Way Home, a film that Holland himself has called “the most ambitious stand-alone superhero movie ever made.” Then there is February’s Uncharted, a slick, *Indiana Jones–*y adaptation of the best-selling PlayStation franchise. “This is that moment of, like, ‘Can Tom Holland stand up on his own and be a leading man?’ I know that makes me sound like a dick for saying that,” says Holland. “But for me it is, ‘Can I do it without the Lycra?’ ”

Read more at the source