The Charm (and Grit) of Tom Holland

Tom is on the new cover of Esquire for March. The photoshoot is amazing. You can check out the cover and photos from the shoot in the gallery. I will add scans when I get the issue. 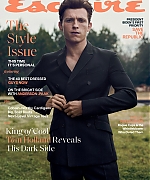 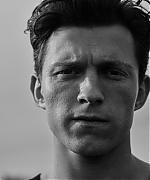 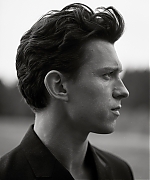 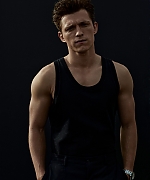 ESQUIRE – In the late fall of 2019, Tom Holland was lying sideways on the floor of a jail cell, sweating, convulsing, throwing up blood. His rusty brown hair had been shaved off; his typically smiling eyes were sunken. Wearing a khaki prison uniform that hung loosely on his frame, he rocked back and forth on the floor, smacking his head against the cement a few times in the process. Then the directors called, “Cut!”

Holland, the twenty-four-year-old British actor best known as Marvel’s friendly neighborhood Spider-Man, the sweet-faced hero of the ever-expanding cinematic universe, was in character for Cherry, a forthcoming film in which he plays an Army medic who returns home from the Iraq war with undiagnosed PTSD, develops a heroin addiction, and starts robbing banks. After filming the scene that takes place in the jail, Holland was a little woozy but still pleased with his performance, so he did what any young person might in a moment of pride: He sent the footage of himself writhing around in the cell to his mother. “Biggest mistake ever,” he says now, grinning. “I was like, ‘This is how my day’s going,’ and she was furious with me.

“I guess I wasn’t thinking right, and I was like, ‘Do you know who would really like to see this? My mum.’ In hindsight, it was a really stupid thing to have done.” He continues: “I think when my mum goes to see my films in particular, the things she likes the most are the moments she goes, ‘Oh, that’s my little boy.’ But in this film there’s nothing like that.”

It’s been more than a year since Cherry wrapped, and now that the color has returned to his cheeks, his mum’s forgiven him. But it took some time for his friends and family to get used to the idea of him headlining this kind of film, which is based on the novel of the same name by Nico Walker, a real-life bank robber–turned–literary darling.

Holland’s parents—Mum is Nicola Frost, a photographer, and Dad is Dominic Holland, a writer and comedian—came around after watching a full cut of the film for a second time. “They were able to enjoy it as a movie and not a biopic of their son doing heroin,” he says. “They are really proud, and they really liked it.”

Satisfying his parents is the most important thing to Holland, and at his age, it’s a desire he hasn’t yet learned to hide. “If I seek anyone’s approval, it would be my parents’,” he says. “That would be the highest level of achievement.” So by this crucial measure, Holland has already succeeded. Now he just has to figure out how to talk about the film with the rest of the world, all while fulfilling his ongoing obligations to Sony and Marvel as the youngest Spider-Man in the history of the role. It’ll be no small feat: His next release takes on the horrors of the opioid crisis, but he’ll have to remain the superhero next door. He wants to please his family, his bosses, and his fans while facing perhaps the biggest challenge of all in the process: being pleased with himself.